Blitzking bullets have very thin jackets drawn to an exacting concentricity standard of 0.0003 in maximum variation, and their weight is held to within ± 0.3 grain. All Blitz Kings have a proprietary polymer tip design with a very small meplat for high ballistic coefficient. These bullets also feature a boat tail shape to further minimize drag and improve ballistic coefficient. These bullets are designed for explosive expansion with high accuracy characteristics. 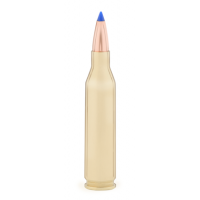